Winter is at hand. We are in the depths of winter.

The serene frosting of snow coating nearly every surface within my views this morning as I glance out my office window at the nearby fields and then swivel to now cast my eyes on to the white and frozen surface of the Suncook River as it rounds the ninety degree bend just below my house, is devoid of life. My eyes can't detect any visible life nor of that below this white mantle. So what really is going on right here and where you are beneath the snow and ice today. And what in the world are the things we can't see, eating all winter? 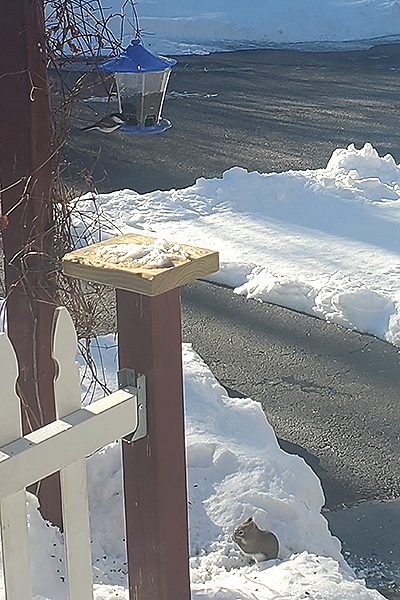 First of all there are the things we can see at our bird feeders and we can see just what they are eating and what they like best. From squirrels to the flock of Blue Jays, chickadees, titmice and nut hatches, let alone the crowd of gray squirrels and a few red squirrels all are dining on my offerings of seeds. So it's easy to see that lots of things eat seeds all winter. In reality for much of the year their diet is mostly insects. Not seeds. So right up front we can see that wildlife eat lots of different things depending upon the time of year and obviously what they can find.

I can sure relate to these changes of diet of wildlife as I have been watching these changes cycle upon cycle over my half century career as a wildlife biologist right here in New Hampshire. Some are easy to see. I did winter deer yard checks for nearly all of my 31 year career as a wildlife biologist for the New Hampshire Fish and Game Department. Deer eat brush and bark all winter long. Well, unless there was a bounty of acorns from last fall,  even smothered by a foot of snow, will be searched for this valuable food source. Turkeys too will stir up the snow to get acorns. So in Northern New Hampshire it is the winter deer yards of firs that give shelter and food and hemlocks to the south. Some bark of these trees are eaten too. Any nearby branches of hardwoods will be consumed as well. So deer and moose mostly eat sticks all winter.

Some animals like chipmunks, squirrels and even Jays have stored some food for their winter's lard. Some like woodchucks and black bears have stored those acorns or beechnuts as winter fat to be devoured slowly all winter in hibernation. Of coarse our beavers spent the fall building a cache of branches and limbs to feed on under the ice all winter long as well. But most animals have not stored enough fat or food to carry them through winter so must find food daily.

So often over the years I have seen where a deep winter snow melts to reveal lots of trees and shrubs stripped of their bark by the subnivium inhabitants such as mice and voles as high up as the snow reached. A study of wintering fisher in Maine years ago found that even some fisher were feeding on apples for a period beneath the deep snow. Lots and lots of feeding goes on below the snow and out of the search of our eyes. So mice and voles stay active all winter long as do the foxes, coyotes and owls who feed upon them. They need to catch something every day to live to another day.

Some of our wildlife like loons have simply moved to our coast and dine on mussels and crabs and maybe even some seaweed to carry them through the winter. Lots of animals move about to find food in winter. Some years back a study of turkeys in New Hampshire showed that some radio transmitting turkeys moved some eighty miles in winter to find food. Fish and Game turkey biologist Ted Walski always proclaimed the "spring seeps" that is where underground water flows to the surface in winter melting the snow and leaving exposed vegetation for turkeys to eat. Hey they have wings. Most will figure a way to find food.

I have personally watched river otter dive below ice and come up with a good sized sucker fish to eat. And there was the time I was watching with my spotting scope only to see an otter come up with a painted turtle in its mouth. He sat on the ice and ate it like a cheeseburger. Very quickly I might add. Another time I was heading cross country and came across a beaver pond only to see holes in the ice where an otter was coming up and eating bull frog tadpoles, eating just the tails. Bull frogs take several years to mature into adults so apparently there was an abundance of them below the ice in that pond.

So what is happening under the ice on our ponds and streams. Well just in time for winter they were loaded up with food for the winter denizens. Remember how beautiful these flowing waters were last fall with colorful leaves constantly sprinkled on them as we watched them gently float by or be churned into the rushing water as a rainbow in a drop of the stream. Well things have been munching on them all winter. .Mayflies, stoneflies caddis flies, tadpoles have all been turning last falls glory into proteins for all the other fish who have been feeding on them. So last falls gleaming brilliant leaves may be turned into that brilliant speckled trout we may catch next summer. Not even color is waisted in Nature.