Another dusting of snow is powdering the trees and power lines out my window.

Up until just a week or so ago it sure looked like we were going to have a nearly snowless winter here in Central New Hampshire. Then we got brushed by a strong storm that left a couple feet of snow just south of the Mass. line leaving us with just five inches or so. Today's dusting, if that is all it is, falls on the heels of another such quick moving front that left about three inches here three days ago. So maybe six or even eight inches of pretty new snow on what was bare ground . Glancing at my diary I see that just seven days ago on the first the sides of Route 89 as I headed over to Henniker was mostly bare ground. Nope. Not much of a winter so far.
So what is the effect of this paltry snow going to have on wildlife. No doubt the deer have not had to yard up over much of the state so far this winter. Two things trigger deer moving into their winter "deer yards". First and probably foremost is the snow depth. Long term studies show when snow depth is greater than eighteen inches deer are forced into their winter deer yards. For Northern New Hampshire that is the fir thickets but in Central and southern New Hampshire it is the overhead cover of hemlocks that deer seek out. Often along streams but any place there is a thick canopy of evergreen branches to reduce heat radiating from a deer's body. So it's not so much there's less snow there, it's the conservation of heat that is the most important. Deer naturally reduce their movements to conserve their energy and stored fat as they cruise through winter really on slow motion speed. During my college years UNH was doing nutritional studies of deer in pens right on the edge of campus. I think because of my size and strength at the time I was asked by the professor overseeing the studies to help "handle' some of the deer. Yes I began catching deer at a young age. But even in the UNH deer pens with the best food that they could be fed these deer typically lost weight each winter. It's just how they figured out how to survive. Save your energy don't eat and especially don't move much.
The second trigger for deer to move into the warmer canopy of evergreens is temperatures. I think as the temperature drops down toward zero they yard up as well. Don't want to radiate energy off into the sky. Lay down curl up. Don't eat and don't move much. 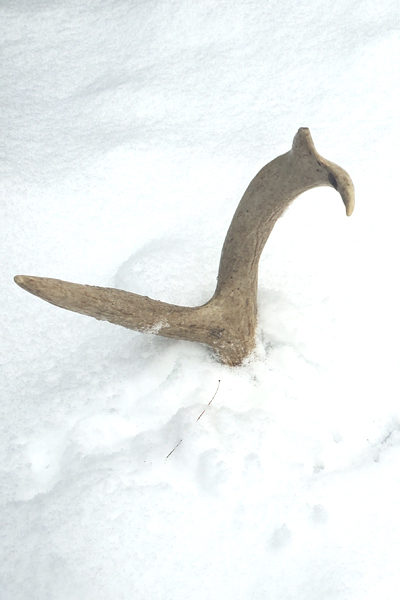 And it is mid winter that the adult bucks, male deer, are actually shedding their antlers they so painstakingly grew last spring and summer. Same goes for bull moose. These shed antlers are called "sheds" or "drops".  It happens every winter. And there is a growing number of outdoor enthusiasts who are not going out to find these drops. It's great winter fun, especially if you are a deer hunter. It's just another form of hunting. So you are not hunting a deer but just an antler or two. There are lots of folks who have actually trained their dogs to help them find them.
Which leads me to thinking about this practice. I hope if the deer have yarded these folks would NOT be bringing their dogs into these winter yards to stir up the deer. This is no time to be stressing our deer. So if you are headed out seeking drops please leave your dog at home to avoid stressing the deer.
Since the snowfall I've had nearly two dozen turkeys here most days. I feed out a mixture of 60 percent whole corn and a mix in of cracked corn and sunflower seeds. This makes all the birds stay around from ground feeding juncos and doves and has the turkeys scratching things up and staying around a little while too. Just seems to work for me. Oh and don't my squadron of a dozen or more blue jays spend lots of time at my raised feeder platform. Lots of color out my window again this winter. I do have an opossum who swings by every couple of night for some of the whole corn and other scraps I toss out for it and the jays.
It won't be long now before we'll see the sap buckets hung and there will be other signs of spring to follow. We are just over a week from the breeding season of many of our wildlife species to be thinking of mating. Owls and coyotes will be filling the nights with their calls. We are on the cusp of lots of things happening here in New Hampshire on the wildlife side of things. While we may feel like it's the middle of winter and want to act more like the deer and not move much, there's a lot of critters stirring and looking for love this Valentines Day and beyond. The pace of things is about to change quickly. It's time to really start paying attention to what's happening in the woods around you.