Day 31 with Temperatures Running Above Average.

Looks like we are in a winter heat wave. In fact yes we are as today marks the 31st day of temperatures running above average for this time of year. A look out the window from say Londonderry to here in Epsom and all the way up north sure doesn't look like late January. Every river from the Suncook River out my home office window to rivers large like the Merrimack and small like the Blackwater and Tioga are all running ice free. Even the smallest of streams here in town are completely ice free. So is it just me or is this really, really weird?

Last year 2020 tied for the hottest year on record with...2016. I don't know about you when two of the last four years have set record temperatures I think it's time to double down on our efforts to address climate change. While it seems kind of nice to have a mild winter while we are all locked down with the virus raging. We all know this just isn't right.

And as I recall a pretty snow scant last winter that really started us into the near year long biggest heat wave and drought impacting our farmers and streams dramatically  I can't help but think looking out my window that this is another ground hog day happening. Are we in the beginning of another drought? I can't help but wonder.

In order to help out with the sheer boredom of this pandemic I at least try to take a drive a couple times a week. In my four cylinder non-gas hogging pickup. It sure does make you appreciate when you were still working and getting about in the state from my 31 years as a wildlife biologist at the NH Fish and  Game Department, followed by another twelve years as a "field biologist" for the National Wildlife Federation. I sure like to stay connected to What's Wild in NH which has been the title to my weekly live streaming of wild things on the NH Wildlife Federation Face Book site. Certainly my weekly wanderings are fodder for those videos. I usually do a bit of a foray north and one to the coast each week. I'm due for maybe a southwest drive I think. Back when there was four feet of snow deposited in Danbury mid December I sure had the need to go experience it for myself. 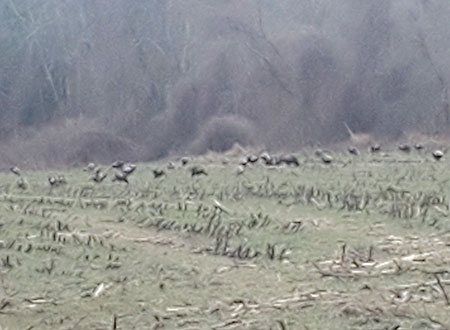 On the wildlife side of things. I took a shorter drive just here in Central NH Sunday. I had to stop and try to count a field full of turkeys, by my count almost exactly a hundred. Yes our turkeys are doing very well this winter. No doubt out deer as well. And this lack of snow seems to be statewide. No need for Fish and Game wildlife biologists to be checking winter deer yards yet. But winter stays until well into April in northern NH so let's just say "We are not out of the woods yet." My drive by Lake Winnipesaukee showed that water body nearly all wide open save for the most southern section of Alton Bay. Even there from the folks out on the ice it only looked safe just a little out past the band stand. 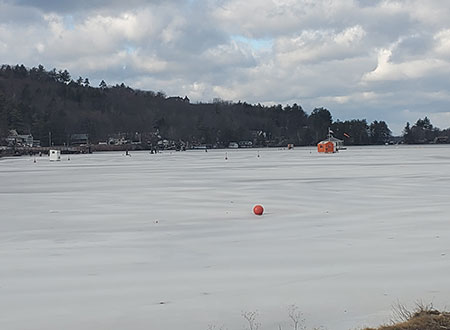 The December snow and Christmas rain has at least filled the vernal pools with water. By late fall most of our local brooks were running well with water again. I just hope that this lack of snow doesn't bite us again next spring and summer. We had snowmobiles going by my house on Trail number 15 for just three or four days back in December. One tough winter for those businesses that depend on snow. Not exactly welcomed in this economic downturn. And i can't help but think with all this bare ground around and with the sun getting a little higher day by day that even with the big chill down that is expected next week the warming bare earth will keep some light snow from sticking around. Yes it's just a very weird winter.