Except for the lack of leaves and much shorter days it looks like summer outside.

So we had temperatures near 70 a couple days ago. My lawn and nearly all the farm fields around town sure are still green. Not a hint of frozen ground to be found. I even checked some on-line cameras around the state yesterday wondering if there is any snow to the north. I found none. The opening day of the regular deer season November 11th had temperatures well into the 70's. My son and a couple others showed up for the opening day of deer season in T-shirts and shorts. NOT normal. I'm guessing this November may go down in records as one of the warmest. Just saying.
I had a surprise visit from a Turkey Vulture yesterday morning. I quickly tossed out the first thing I could lay my hands on out of the refrigerator drawer. Bologna. He didn't shy away as I quietly slide the window open just far enough to toss it out. He welcomed the treat. Bologna a treat? Hope so. So then I dived back in to come out with some Thanksgiving left overs. The timing was right for him. And he's back this morning. Luckily I found more stuff. I have a call in to a local trapper with hopes of coming up with a beaver carcass. That should keep him/it happy for a few days. I put it off the ground on a raised platform not wanting to invite larger critters around like coyotes or foxes. Or a skunk if you know what I mean.
And there he set this morning on a wonderful perch I had a local logger leave when i had some trees removed this summer. They had grown and spread out so much over the years that they could impact my garage roof and were shading my deck too much. As he was cutting and I was watching I shot out the door to wave off the felling on a medium sized cherry tree. It left a wonderful perch that I thought at that time would be a perfect perch for some Regal bird. Alas today it was the vulture. Not quite as Regal as I had imagined. But yes our expectations during this deadly pandemic have been lowered a bit haven't they.
But here he/it is up close and in person (bird). Seldom have I had a chance to watch one up this close. Mostly as a spiraling black form against the sky or some blurry image as I sweep by at highway speed. So to have my very own vulture to learn up close is kind of nice. Yes I do need a beaver carcass or two. 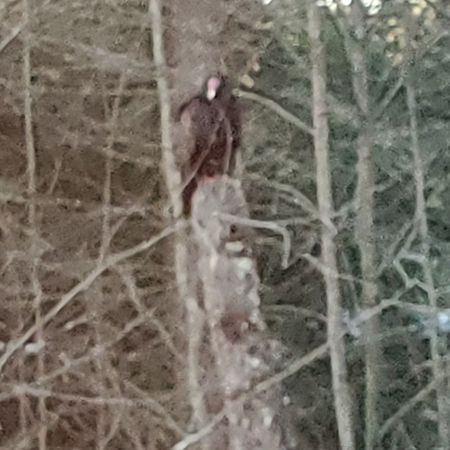 Wildlife wise, other than pretty much constant turkeys about I am not seeing much. Now that was a lie. As we came home two nights ago in the warm rain after we, for the first time, did a grocery pickup, but what was leaping across the road near my house, but a frog. From its gait I'd say a tree frog. Yes you can recognize different frogs by how they hop. You just have to observe and learn them. Any ways I'm pretty sure it was a tree frog. Normally by now they would be frozen to death. Thinking of these frogs and Spring peepers freezing to death every winter then resurrecting each spring still tickles my brain a bit. How amazing wildlife is and always has been for me. Other than my legion of Blue Jays and mixture of woodpeckers and a few cardinals, chick-a-dees, tit mice nuthatches and doves everything seems to be kind of stable right now. So no big news on the bird front. Did I tell you about my awesome Turkey vulture?
So we remain mostly hunkered down hoping that the darkness of this virus passes us and family by as we all await the vaccine.
Trusting in science as most of us older folks learned when we pushed back the grasp of death or life long impacts of polio when we all got vaccinated in the early 50's. I am a scientist. I believe in science. I believe we will make it through this. Unless of coarse that vulture sitting seemingly patiently waiting on my perch knows something I don't know. He has such a friendly face.