What a difference a week can make this time of year.

What a difference a week can make this time of year. Our nights have only cooled modestly the last couple of weeks. But tonight, Friday night, as well as the next two nights after that there is a chance of a frost here in Central New Hampshire. I guess I may need to pick the rest of my tomatoes, green or not. The three rows of potatoes can be dug until the ground freezes so no rush there. Right?
This was a very different week for us sky watchers. Early Tuesday morning I was headed to the coast for my chance to go deep sea fishing with my son-in-law and his fellow Concord firefighters. I glanced at the rising sun as I headed East. I had to take a second look at what looked to be a full moon rising ahead of me. Oh, it was the sun. Al right. But it had a moon-like pale glow. I later learned from my son-in-law that it was because the smoke from the West coast was now overhead here. Even a few miles out at sea, where usually the sky is pretty darn clear, that the sun continued to be this dull orange orb. Nothing like I had ever seen before. The sky was all milky colored until the cold front pushed through Thursday evening. We have had smoke overhead before from fires in Canada, but to my memory, never as thick as this.
On the way home from the coast I noticed the already turning maple leaves in clusters here and there were really not as brilliant as they should be. The light was just plain dull and therefore the colors were not as bright as I am used to. I hope this smoke goes away before the peak of our foliage season. 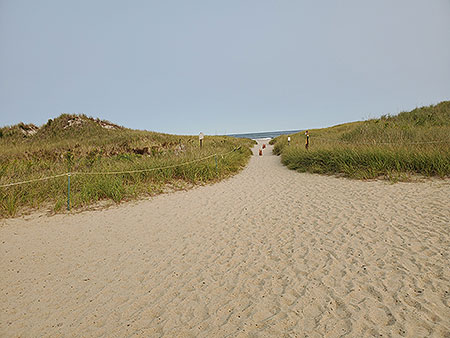 I did stop at Hampton Beach State Park before leaving the coast. I have been going down each year mid September for my Monarch butterfly survey for over a decade now. Monarchs usually have a peak migration through New Hampshire on the 13th of September. I was two days late. I waited and watched nearly an hour there without spotting a single Monarch. Most years I see at least a few and some years a steady procession. Not this year. Not one! This is really weird in my book. I have only seen maybe four or five Monarchs in the last two weeks nearby. I sat on my front deck more than an hour yesterday afternoon hoping to see one come to our flowers as they usually do this time of year. I saw none. So what is up with the Monarchs. I'm hoping for a good answer from other sources. I did Facebook about my Hampton survey and a couple of friends said they had spotted some earlier this month in the Lakes Region. I'm hoping my observations are just an anomaly.
I'm seeing lots of turkeys nearby almost daily. I have not seen numbers of hawks yet either. Maybe the smoky skies are hiding them. A week ago at dusk I had a pretty big flock of Night hawks go by. I'd say close to two dozen. Not something I had seen before here. At least I figured they looked like Night hawks.
The trees continue to color up. The drought continues to stress our trees and they just seem to want to go to sleep. So 2020 is not a great year for them either. I like the idea too of sleeping through the coming winter. Who can blame them.
The local farmers is chopping the last of his corn this week. I want to touch base with them to hear how it went. I'm guessing they have half of what usually comes off the fields here in town. Anything we all can do to help our local dairy farmers we should be doing. Hey if you are a turkey hunter? Where do you most hunt them? Yes around the local farmers fields. Turkey hunters should be figuring a way to support these farmers at this critical time.