I can practically hear the leaves bursting from the trees.

How quickly spring is erupting this week. The leaves are literally popping from the tree branches by the hour. Yes look at a tree first thing in the morning, then late afternoon and you will see it has turned greener. The sun has such magical power over everything as it climbs higher into the sky. The sun's power just seems to unlock life from its winter slumber. The sun quickly paints the hills, fields and lawns lush green colors. A dab of dark green there. Some lighter green brushed across the top of this hillside. Then, lets pour some real dark green all over this field. The sun is having such a good time around here this week. And so am I. I'm still picking fiddleheads too. 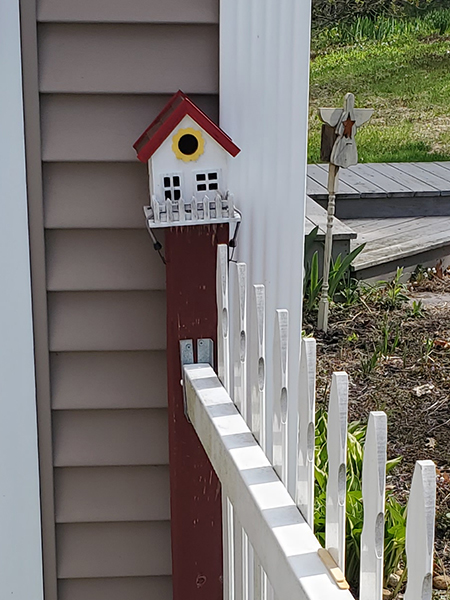 As I stepped outside this morning the house wren was at hand. I mean I really thought he was at hand. His bubbling song was practically deafening. I just stopped to look as I exited the house and slowly closed the door. It just sounded like I should be able to reach out and pick him up. But it was the house itself that fooled me as it acted as a sound chamber amplifying the sound all around me. As I walked out to get the paper the intense song followed. I just couldn't figure out which direction it was coming from. I never did spot him. He arrived two days ago and has been just a bit farther off. So I knew he had returned. My wife and I set out the wren houses on Tuesday in anticipation of his arrival. I was off by one day. My mom's came back the same day. Wednesday. Two years ago the female finally settled in on the bird house on the railing on our front deck. So we got to set six or so feet away from the wren's nest as they hatched they hatched them out. Fed them for days. Then we watched as they fledge all one afternoon. It was a glorious summer.
This is the time of year that our deer mothers are on the move right before giving birth. Car kills usually go up a lot in May. So watch out for deer if driving dusk to dawn. Most things such as foxes, coyotes, raccoons and fisher have already given birth. They too are on the move to find enough food to nourish themselves as they nurse. Then come June they will be weaning their young and must resort to foraging during the day. So a daylight sighting of a fox or coyote doesn't mean it is rabid. It is simply trying to feed its young. Leave them alone and they will be out of sight very soon as the young can travel.
I've got peas and radishes up in my garden. For the first time this year I have tried planting some potatoes in big pots. I hope to get some real early potatoes out of them to eat by mid summer or sooner. This cold damp spring has the ground slow to warm and some things just seemed to be on hold for a bit. My daffodils bloomed for more than a month now. They are looking a bit bleaker over there in the corner of my yard as I glance out at them. They had an awesome run this year. As has my forsythia. In fact forsythias everywhere were so brilliant this year. Didn't we all need that boost.