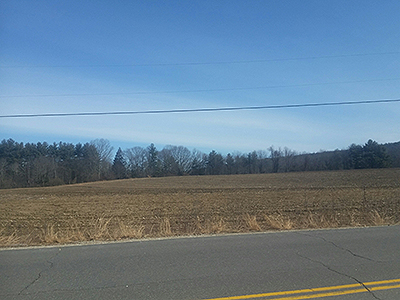 Boy didn't it seem like we were in for a long winter when we got blasted with snow last November. But by mid December it had vanished. And seems like even the four or five small snow storms we have had since January haven't lasted all that long.

Now I have cheated a bit as I missed a week of frigid temps the first week of the New Year while I was down in Aruba. And I just got back last evening from about a month in Florida. And yes I do know that there was that week of "record breaking cold" while I was away and one or two snow storms.

But when the sun came up here in Epsom this morning I witnessed bare snow free fields and lawns. And even more amazing is the fact that the Suncook River that flows by my house is ICE FREE. I have lived here 40 years come July. There has never been a winter that the river did not freeze or nearly completely freeze here. So despite the "record cold" a couple weeks back the river has remained nearly completely ice free this winter here. When I first lived here and for a decade or more after this section of river was turned into a snowmobile track for several months. It is so amazing to see our winters disappear during my life time. I think folks are way underestimating the affects of climate change here in New Hampshire.

No doubt we could be buried in snow later this week or next. But the fact is old sol has climbed pretty high in the sky since late December. I'm betting the river will not freeze this winter. And what ever snow we do get is going to melt pretty quickly in the lengthening days. The sun will win.

I did see the local flock of about 50 turkeys a bit of a ways from my house this morning. But in the same piece of woods and fields connected to my house. My sister came by often to put some corn out for the birds and turkeys so I bet they are sure to be back soon. While the bare ground is a big help for the turkeys and deer the lack of a snow cover means the littler creatures like mice and voles are more susceptible to hungry eyes though.

I drove to Florida and back. A straight overnight shot down and thru a day. Back I took two days to cover the 1,400 miles. As always I'm on the lookout for road kills. It never ceases to amaze me how many road kills I see. This year's count on the return trip included:

The most numerous were opossums at around 20

A similar number of racoons.
Maybe 10 deer, down in numbers from past years.
One definite red fox, one gray fox and one coyote.
Three dead dogs over a distance in SC.
One live black colored boar in Georgia, a first for me.
A surprising number of what I believe were dead owls, likely barred. Probably more than a dozen. Though some could have been hawks.
I would say more than thirty "dead unidentifiable things"
No dead turkeys or turkey vultures.

So I guess I'll just hunker down and see what winter sends my way. So far not much. So far a pretty good winter for wildlife.

read the note
View all NH Nature Notes for 2019