Chilling out after a long dry spell. 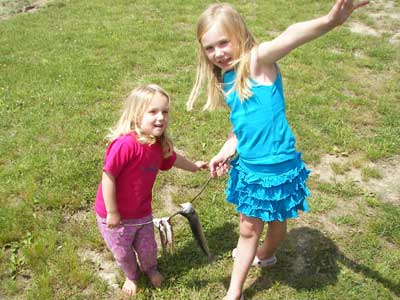 It is cool and misty today, just like yesterday and the day before. But this mist is not what we need. We need rain. The Monday night prediction of a heavy rain turned into nothing but a brief Tuesday shower with less than 2/10ths of an inch of rain in my gauge. The garden was powder dry when I planed another row of peas and corn on Monday as well as some dill and melons. And the Suncook River out my home office window is mostly a sand dune from this perspective. Things are drying out, though everything within sight is still lush green.

Last weekend was sunny and warm. Perfect for the Saturday fishing derby held by the Odd Fellows here in Epsom. Derek, my son-in-law brought my two granddaughters, Katie and Erin, down to it. They both landed a trout or two although Katie was off playing with the other kids at times. It was little just turned 3-year old Erin who looks to be our next fisherman in the family. And she is a bug and worm girl. She just loves to play with anything crawly. She catches caterpillars at home and calls them "waterpillers" and spends a whole afternoon playing with them. We may have another biologist on our hands. She pretty much kept a worm in her hands at the derby that was then replaced by a trout one she caught one. She's a real bugger. Her dad and I took them back to the derby pond Sunday afternoon. We were headed down to Bear Brook Sate Park to fish but an obvious motorcross race was taking place across the bridge we had planned to fish from. So we ended back up at the derby pond. Good thing as the trout were really biting. Both girls caught trout all by themselves a few times. Plus a couple of frogs were caught and Erin played with them a while as well. Toads trilled from the far side of the pond making for a very peaceful yet exciting afternoon.

Temperatures this week have been averaging 20 degrees below usual. This and the overcast skies may slow the garden down a bit this week. My local crows have swooped in for the offerings I have placed on the platform out back this week. I place table scraps and our old bread out there regularly. Things that don't get composted. Where it is off the ground I don't have to worry about attracting skunks and such. And generally between the crows and the jays any food items are gone very quickly before nightfall. Just another way I keep things out of the landfill and sort of recycle it back into nature. This house produces little garbage for the landfill compared to most I am certain. It kills me to drive down the road on trash pick up day, for those that don't recycle at our local transfer station, and see 5 or 6 barrels of trash weekly at the end of each driveway. How can all these people be so far removed from the environment that this is acceptable for them? I just don't understand how this day and age people can be so ignorant, or lazy. But by far nearly all the two dozen homes below me on this dead end road have multiple barrels out each week. Unbelievable!

read the note
View all NH Nature Notes for 2009