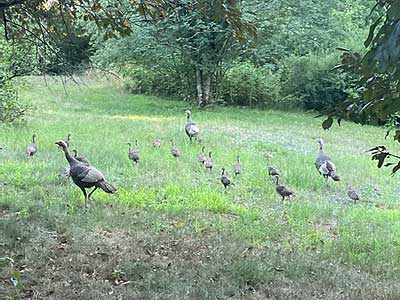 Yesterday it was nearly 100 degrees here in town. A number, luckily, we don't see very often compared to much of the country, especially out west. And , yes, we are in the third year of a drought. This morning's ten-minute downpour seemed so refreshing. How quickly things have dried out here in town. My front lawn even turned brown, I think, yesterday. All the more to welcome even this tidbit of rain. Looks like we might get another shower this afternoon.
A couple weeks ago I began to do weekly Facebook videos of the Suncook River and a couple local mush smaller brooks as well as a stop at the Merrimack River dam in Hooksett New Hampshire. I plan to capture whatever changes happen to these streams through the rest of the summer. If this drought continues through the summer I want to detect the changes in our streams and maybe speculate about it's impact on our fish and wildlife. Stay tuned for that on my Facebook side. I also post them on my You Tube channel New Hampshire Fish and Wildlife channel. I have a couple hundred videos on my You Tube site that have had very few views. I actually started my You Tube channel in May of 2019 to begin sharing parts of my diaries from my three-decade career at the Nh Fish and Game Department. I started sharing them with the Nh Wildlife Federation Facebook page later that year where the viewership went up a lot.
Although as I set here in my home office it seems devoid of sounds, I bet I am missing something outside. Recently I rediscovered an app on my phone the Cornel Bird Lab bird song IDing app called Merlin. If you don't have it I suggest you do. In the time I set here to type this and answer a couple of texts, my phone said four minutes, my phone and the app has revealed a blue jay, a Red-eyed vireo, a Northern mockingbird and an American goldfinch right outside my window. I have heard none of them myself. But I now know they are here. Such an awesome app to have in hand all the time. Well, my hearing is not what it once was. I call my loss of hearing, and breathing, MY student debt. You see I worked my way through college in the late 60's into the 70's at construction. I graduated with no student debt financially. I've always been pretty good sized ,which always seem to qualify me as, "the jackhammer man". Way before OSHA. No hearing or breathing protection. So, the Merlin app is an awesome way to now know what surrounds me even if I can't hear it unless it's nearby.
I think we've had just enough rain to keep the local farmers cow corn growing and hopefully enough water to keep our streams flowing at some level.  We did get a half inch of rain last Monday too. Most fields and lawns are still nice and green. Hopefully enough rain to fill out the wild fruits like blueberries and black raspberries and such. I'm not seeing mush for wild apples though. Getting close to time to start seeing if there are any acorns and beechnuts. The Nh Fish and Game Department has been collecting information of fruit and nut production in the wild for over two decades. I'll ask late summer to see how it went.
Saw three turkey hens with twenty polts nearby the other day. What a sight that was to see!  I've been seeing lots of adults around but this huge flock of polts sure was pleasing. I'll report them to Fish and Game this week.

read the note
View all NH Nature Notes for 2022